Bible Bowl 2007 was a great experience for our family, as I took the week off and traveled with my wife, four of our six kids and my parents to stay at the Westin Crown Center in Kansas City for the four-day event.

The Austin team took 10th place in the double-elimination team Bible Bowl competition. My daughter Ruth led the team, her brother Joe was the captain, and their sister Rebekah also participated. Here they are just before their first game on Thursday, against the eventual national Bible Bowl champions from Worthington, Ohio. 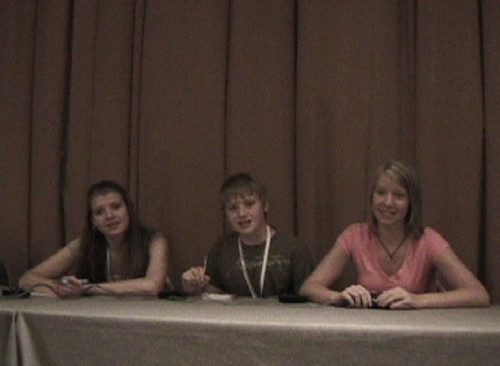 Unfortunately, Bible Bowl rules don’t allow videotaping of the team competitions, so I can’t show how intense and skilled these young men and women are. Worthington played exceptionally well, coming back from a Thursday morning loss to win two games in the finals Thursday afternoon against Kissimmee, Florida.

Here are Rebekah, Joe and Ruth on the Bible Bowl awards platform: 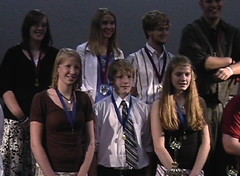 …and here’s the video of them receiving their medals. The reaction Joe got when everyone found out he’s only a sixth grader was pretty funny.

In a previous post, I showed the Quote Bee highlights, which gives you an idea of how well the participants committed the text to memory. Which leads into the next video and picture, from the Thursday afternoon Bible Bowl awards ceremony.

Each Bible Bowl tournament starts with a written test. During the monthly round robin events it’s a 150-point test they call the “Brain Test” on the chapters that have been covered to date. In the college tournaments in June, the tests get longer and more difficult, and at Nationals it’s a 400-point monster, and its formally called the National Bible Bowl Achievement Test. Here’s the video of the awards ceremony where the top 20 were recognized. (I pick up with the top 5):

And here’s a picture of Brandi Gass from New Life in Ohio, and my daughter, Ruth Aase, who tied for first with a score of 350. Brandi took first on the tie-breaker. Congratulations, Brandi! 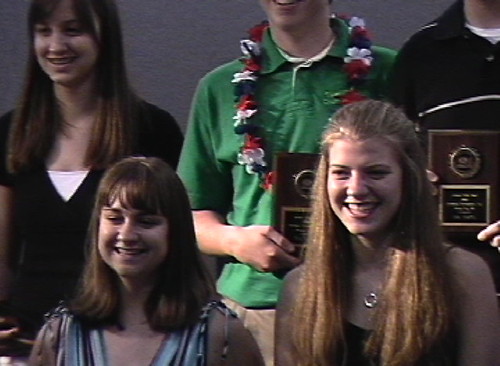 That’s another thing I wanted to highlight about the competition: it was intense, and everyone did their best to win, but everyone was honestly happy for those who won. After a game when they shook hands, it wasn’t easy to tell who won by their demeanor. All the kids are friends and wish each other the best. That’s a life lesson I need to apply as I’m watching Rebekah and Joe in volleyball, football and basketball.

I want to conclude my posts on this week’s Bible Bowl experience with a special thanks to Tracey and Geri Chamberlain and their son Jason for their coaching. Tracey and Geri have been doing this for more than 30 years, and previously had some larger teams, or multiple teams from Austin. This year the team has been just Ruth and Joe, until Rebekah joined them for Nationals.

Rebekah and Joe have their sports, too, but for Ruthie this is her extracurricular competitive outlet, and she takes it very seriously. We’re so thankful to God for the Chamberlains and their willingness to work with Ruthie nearly every day to help her become her best. They are a delightful family, and clearly they take delight in Bible Bowl and in having a competitive team, but still it is a wonderful blessing to have them pour so much time and attention into Ruth.

Psychologists say parental involvement is a key predictor of a child’s success in life. Our kids have had that, especially being homeschooled by my wife, Lisa. Another important success factor is attention from other significant adults, and the Chamberlains have certainly given that to our kids, too, as Rachel, Rebekah, Ruth and Joe all have gained from participating in Bible Bowl under their leadership.

Here’s a picture of Tracey with his Austin Bible Bowl team, just before their game against Yuma, Arizona. 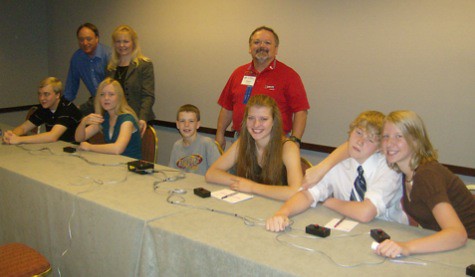 Thanks to Tracey, Geri and Jason for standing behind Ruthie and the rest of our kids!