In Facebook 210, a course developed over two years ago, I described how to use friend lists to make Facebook your all-purpose networking platform.

Back then, Facebook had “only” 100 million active users. Now it’s over 500 million. And over the last couple of years there have been changes to the site and resulting controversies about privacy. I will deal further with privacy protections in Facebook 212 and 213, but for now I want to update the Friend lists concept and highlight the role it can play, enabling you to be friends on Facebook with a wide variety of people without giving all of them the same level of access to your information.

To create friend lists, start by choosing “Edit Friends” under the “Account” tab in the upper right corner of your Facebook profile: 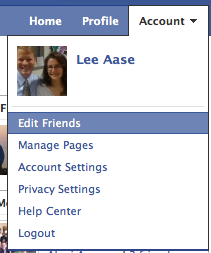 …at which point you will have the opportunity to both name the list and start searching and selecting from among your friends to add to it: 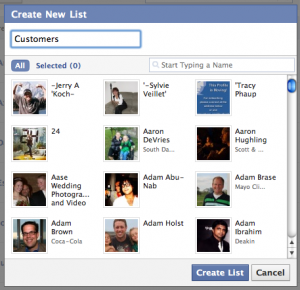 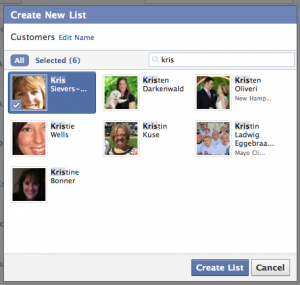 Finally, a given friend can be on more than one of your lists, as you see in the example below:

As you will see in the next course, these lists can give you great flexibility in determining who sees which portions of your profile or activities on Facebook. Probably the most useful feature of these lists, however, is that they let you create distribution lists for Facebook messages.

So, just for fun, I created a list called “Facebook Addicts.” No one sees that I have such a named list, but I can use it to address a message to a list of people I have defined:

Those who received this message would not see that they are members of the “Facebook Addicts” list; they would just see their name along with the names of all the other persons on the list.

So this probably wouldn’t be a way to maintain a list of all your customers for a quick group message, unless giving away your customer list isn’t a competitive concern. (You could use it to send messages to them individually, however.) But if you want to keep your customers from seeing some of your personal information, you might use a list called “Customers” to exclude a defined set of people from parts of your profile.

Here are a few examples of lists you might find helpful, either for message distribution or for controlling profile access:

Friend lists are extremely powerful, enabling you to share information easily. As you will see in the next course, they also help you avoid sharing information with some of your friends.

Assignment: Follow the instructions above to create at least two friend lists: