Ever since I started this blog, I’ve used it as my Christmas Letter 2.0, instead of bothering with the cost and hassle of snail mail. Besides, with my celiac disease diagnosis, I can’t lick envelopes anymore, lest I get some gluten in the paste.

Lots of things are different this year. When I wrote last year’s letter we were in the midst of the snowiest December on record in southern Minnesota. Here was the view out our porch window on Christmas morning a week ago today:

Part of the reason for my delay in writing this year’s edition is that for the last week we’ve had a full house, as our son Jacob and his wife Alexi and our daughter Rachel and her family have been here for Christmas. It would have been odd to spend the time writing instead of taking in the fun. But now that we’re down to our usual complement of the four youngest kids who are still at home (and since we got some updated pictures during Christmas, which you can enlarge by clicking), it’s time to recap 2011.

Rachel and her husband Kyle are still in Grand Rapids, Michigan. When they visited us in June, they took a few minutes to stop by my office, where my grandchildren Evie and Judah created some whiteboard art work: 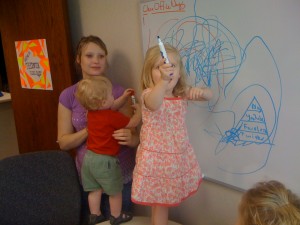 A couple of months later, we got a new granddaughter, Aletta Louise, born to Rachel in August. I didn’t get to see her until the end of September, though. Here’s a picture from that trip to Grand Rapids: 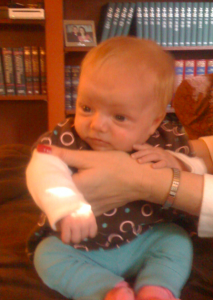 Here’s Rachel with the trio this week: 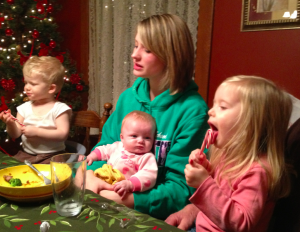 Rachel’s husband Kyle is still in seminary in Grand Rapids, and also is pastoring a small church. We don’t see them nearly as often as we would like, but we’re thankful for Skype.

Our son Jacob is in his first year of Physical Therapy training, with about 16 months remaining until he begins three separate clinical rotations. He and Alexi still live in La Crosse, Wisconsin. She’s working full time to pay the bills while he finishes school. They spent most of the last week at our place, since Jacob is in a school break. Here’s a picture of Jacob, John, Joe and me from lunch yesterday, just before Jacob and Alexi left for La Crosse:

Rebekah and Ruth are both in the two-year RN program at Riverland Community College in Austin, and are back home living with us. Ruth is a year ahead in the program and is already an LPN. She went on a mission trip to Haiti last month, and will be a short-term missionary in Bulgaria this summer. Rebekah is playing basketball for the Riverland team in addition to nursing school. Both young ladies are working at a local nursing home, although Rebekah’s basketball limits her hours for the next couple of months.

Here are all six our our kids, along with their seven cousins on Lisa’s side of the family. Our four oldest are in the middle row. Again, note the lack of snow and the shirt-sleeves attire for a Dec. 28 photo: 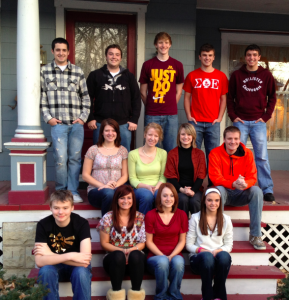 Our son Joe is 17 and a junior in high school. He’s also 6’8″ and getting significant recruiting interest from college basketball programs. He played AAU ball this spring and summer with two of his Austin High School teammates, one of whom is my brother’s son, Tom. Lisa, Joe and I spent lots of weekends together, as their Minnesota Fury Gold team played 50 games altogether. Here we are after one of the tournaments: 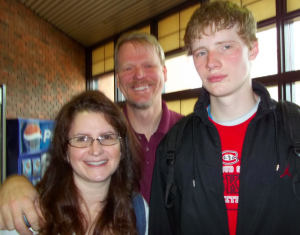 Here’s a picture I took of the three at the season-ending tournament in Las Vegas (Tom is on the left): 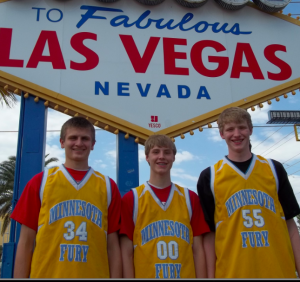 The Austin Packers are off to a 4-2 start in the 2011-12 season. You can follow their progress on the Fast Break Club site. Between Joe’s games and Bekah’s games, we’ll be busy s few nights a week, hopefully well into March.

And speaking of March, one of the other highlights of the year was the 30th anniversary reunion of our 1981 Austin basketball team, which finished 24-1, losing in the state championship game.

John, our youngest, is 13. He’s in Bible Bowl and orchestra, and is in 7th grade. He’s our last home schooled student, and after next year will probably be going to the high school. In her 20th year of homeschooling, Lisa’s finding it a lot easier with just one student instead of up to five at once. While John’s a big boy – about 6’2″ – he doesn’t have much interest in sports, although he did play football for the first time this year.

Our family goes to Trinity Presbyterian Church in Rochester, where I am an elder. It’s been a great blessing to be part of that church family, and we’re hoping to begin construction on a new building in 2012.

Professionally, my last year has been amazing. We have a great team in our Mayo Clinic Center for Social Media staff: 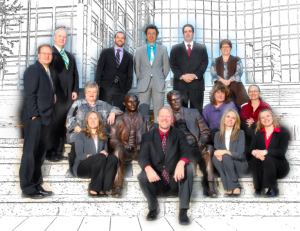 The year was full of too many highlights to go into detail in this post that is already too long, but here’s one major  project that was especially fun. I actually wrote the words for this parody of 867-5309/Jenny in late 2010, but we weren’t able to produce the video until last summer. 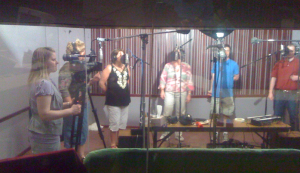 I was the executive producer for the project, and Makala Johnson from our team produced and directed the video. If you haven’t seen it yet, I hope you’ll take a few minutes to watch, and also check out the related app on our Mayo Clinic Facebook page, and also the contest site where you can help spread the word.

I also have traveled a lot in the last year, and met lots of people with whom I had previously interacted in social media. I enjoyed all of the trips, but a couple of the highlights were my first visit to Italy, where I spent 48 hours on a mountain lake near Baveno: 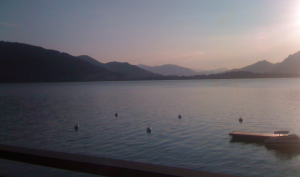 As part of that same trip I got to visit Chocolate World in Hershey, Pennsylvania: 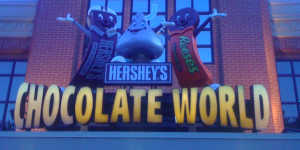 And in November I got to spend almost a week in Sydney, Australia, where I got to keynote the HARC Forum: 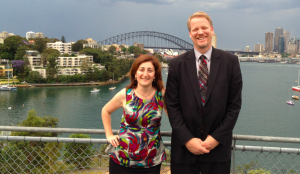 I spent my last work day of 2011 getting my office cleaned for a fresh start in 2012, which meant cleaning up Evelyn and Judah’s artwork after it had adorned my whiteboard for more than six months:

But I did capture their handiwork for posterity, and to share with the world: 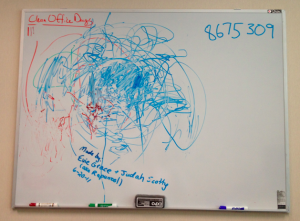 Lisa and I wish you and yours a fresh start and great year in 2012! 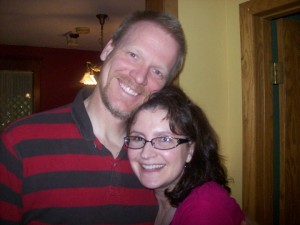