In emphasizing the ephemeral nature of Twitter when consulting with our Mayo Clinic physicians, I have often said the half-life of a tweet is about 30 minutes.

I put it in the lingo of radioactive decay because it is something that scientists naturally get. And while I didn’t have any formal data to justify that half-life estimate, it seemed about right.

But last week when I threw out the 30-minute half-life figure in a conversation, a physician asked: “Really? Is there data published on that?”

Because I didn’t know of any published data, and to see whether I was in the right ballpark, I decided to start a test on Friday.

First, to define the term Half-Life, I take it to mean the point at which half of the people who will ever see a given tweet will see it.

So in other words, if a tweet will eventually be seen by 200 people before heading into the abyss, the half-life would be the time it takes for the first 100 people to see it.

So this was the tweet I used for my quick-and-dirty estimate of half-life:

Going to analytics.twitter.com, I tracked the growth in impressions for this tweet in 5-minute intervals for the first hour. Here’s the graph: 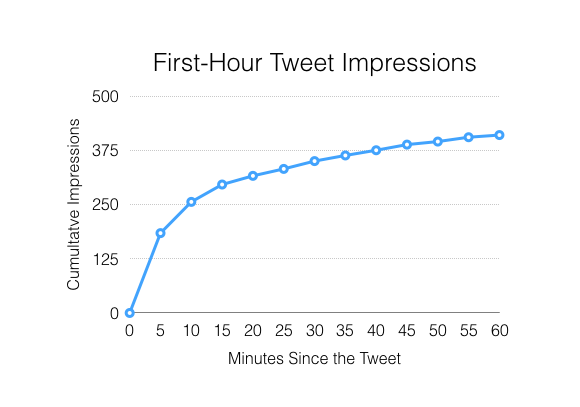 Within the first hour the tweet had 410 impressions. As the slope of the line indicates, it was slowing down significantly. Here’s the graph of total impressions each day for the first two days: 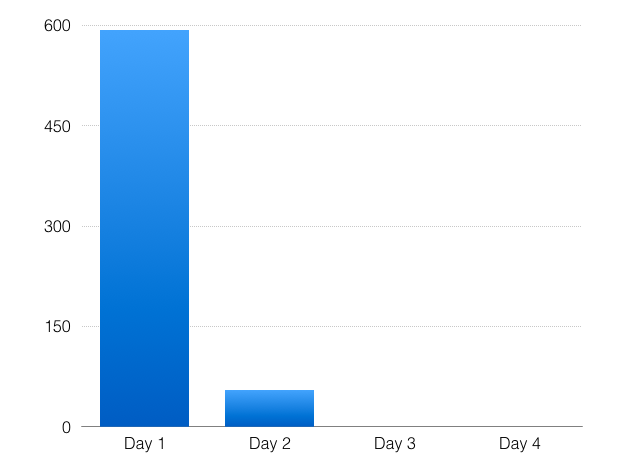 In the first 24 hours the tweet had 593 impressions. On the second day it got only 55, bringing the total to 648. As of this writing, the total is up to 659, so it’s averaging a little over one impression per hour so far on Day 3.

This tweet is on a trajectory to reach perhaps 680 total impressions, which would make the half-way point 340. When did that happen?

This is just the analysis for one tweet, and not necessarily a typical one. Curves for those that get more retweets would have a longer climb before flattening out.

It was kind of a hassle to set my watch alarm to remind me to grab a screen shot every five minutes, though. But if anyone knows a way to automate capturing impressions data for the first hour from a larger sample of tweets, I’d be interested in collaborating with you. Leave a comment or drop me a note.

You can become a SMUG Research Fellow. 😉