Spring comes a little later to Minnesota than it does to the lower latitudes, but we hit an important milestone this weekend, as I was able to go golfing with my middle son, Joe. Here he is about to take his first tee shot yesterday (click to enlarge): 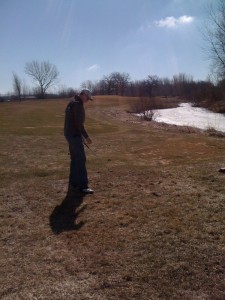 What you see on the right is the frozen creek. And while most of the course was in fairly good shape (though still quite brown), there were a few addition “traps” around some of the greens: 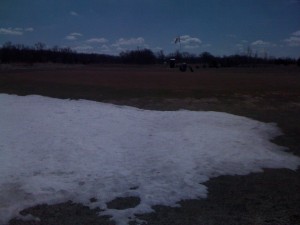 Of course we were playing Winter rules, so landing in the snowbank wouldn’t have been a problem. But Joe was actually aided by the remnants of Winter on the 14th hole. He had sliced his drive, and then had to cross a body of (mostly) water. He didn’t hit it well, and it headed straight for the pond. 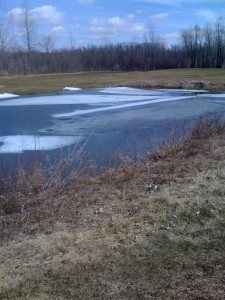 Fortunately for him, his ball hit one of the ice floes and skipped off to land safely on the other side, setting him up for a nice approach shot to the green: 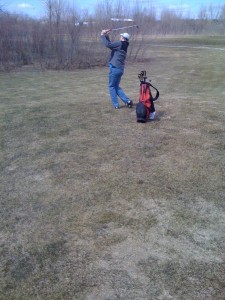 No particular social media lesson here, except that having an iPhone (or other camera phone) along makes it easy to share fun moments that will become cherished memories. (And not just because I beat Joe yesterday.)