I was following the Massachusetts Senate special election last night on Twitter (while attending a high school basketball game), and one thing I noted was that the intense national interest was crashing several Web sites that were supposed to be providing updated vote totals. And from what I read this morning, the turnout for the election was much higher than had been expected – higher than most general elections in Massachusetts (which, as we all know, haven’t been very competitive lately.)

So I was interested this morning when I checked into Twitter and got this “blast from the past”: 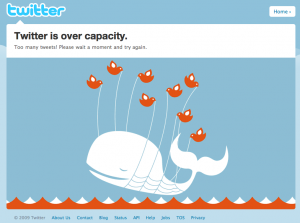 I hadn’t seen this very often lately, and when I did see it the problem usually resolved with the next browser refresh. But this persisted for a while. I’m wondering whether the Massachusetts race had anything to do with it, with all the Wednesday-morning campaign managing (or celebrating).

It’s also interesting that #whentwitterwasdown is currently a trending topic.

On a related note, the New York Times had an interesting Op-Ed this week, “Internet Politics From Both Sides Now.” It’s worth a read.