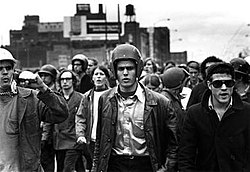 When I first heard about Paul Douglas losing his job at WCCO-TV as part of the nationwide layoffs at the CBS owned-and-operated TV stations, my first thought was that this is the worst day for Weathermen since 1969.

Paul will be just fine; he’s a natural entrepreneur who has already started and sold one successful business. But the layoffs aren’t just among weathercasters like Paul. A $2 million-a-year anchor in Chicago, and 17 of her WBBM colleagues.  WBZ in Boston laid off 30, and the layoffs are affecting all 29 CBS O&O stations.

As part of this trend, news organizations will be increasingly inviting readers and viewers to become writers and producers.

And at KCNC-TV CBS4 in Denver, where last week the CBS O&O laid off at least nine employees, including NPPA member and Video Editor of the Year Shawn Montano, the station is this week heavily promoting their new feature called “YouReport.”

Going beyond the “VJ” or “one-man-band” new wave of video journalism, “YouReport” urges viewers to use their home video cameras and cell phone cameras to shoot spot news when they see it and then deliver their citizen photojournalism to the station, as as quickly as possible, by uploading it to the KCNC-TV Web site. They’ve even written and published a “YouReport Users Guide” to help citizen journalists.

I’ve written repeatedly (here, here, here and here, for example) about the dislocations in the mainstream media. If TV rock stars like Paul Douglas can’t bank their futures solely on mainstream media, it just illustrates that people in PR need to diversify, too. In our increasingly fragmented world of communications, we can’t count on mainstream media being sufficient for “getting our message out.” And even more than that, we need to understand that it’s not a one-way world. It’s not just about getting our messages heard; it’s about hearing and responding to what those formerly known as the audience have to say.