It seems a gang of rampaging ruffians has brought Trouble (with a capital T) SMUG’s global headquarters. Don’t let the chirping birds fool you:

When I spoke with the police officer who arrived on the scene, he told me this had been the fifth report of such vandalism overnight in Northwest Austin. It seems a group of young lads had been out joyriding with a pellet gun, and shooting out windows in vehicles parked on the street.

Not that we know who they are…or that they are even lads. Maybe they’re lasses.

I realized after shooting this video that our situation was worse than I thought, because it wasn’t just the one window that was affected. Two other windows had been shot, but just hadn’t shattered. So I guess the hoodlums kept going until they got satisfaction. 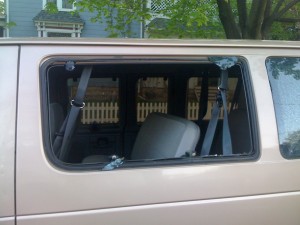 These two would actually be interesting looking, if they weren’t dangerous…and if they didn’t cost several hundred dollars to fix. Click to enlarge: 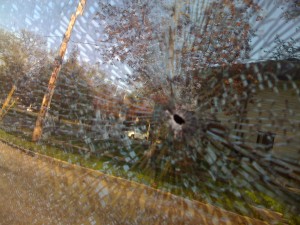 St. Augustine said he discovered the evil in his heart when he stole his neighbor’s pears, even though he didn’t like pears. He just stole for the sake of stealing. He became the greatest theologian in the first millennium of the Christian church.

For their sake, I hope these young lads will come to a similar realization and turnabout.