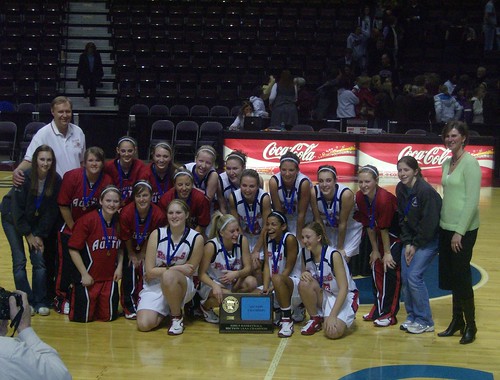 In The Five Dysfunctions of a Team, which I reviewed here, Patrick Lencioni highlights five characteristics of groups that have not become true teams. I said my next post would turn those dysfunctions upside down, and positively highlight characteristics of one of the most effective teams I’ve had the pleasure to observe.

In Lencioni’s leadership fable, his protagonist Katherine relates the story of her husband, a basketball coach, who benched a talented player who was focused on personal statistics instead of team results. Yet (or maybe therefore) his teams consistently had winning seasons, because of the synergy that comes from teamwork.

One way we keep the costs down for Social Media University, Global is by not having any athletic teams. Also, unlike our online university colleagues at the University of Phoenix, we haven’t paid millions for the naming rights to a football stadium.

But clearly, sports can be powerful for marketing. That’s why a major retailer paid $18.75 million in 1990 for the naming rights to the facility where SMUG’s adopted team will be playing its first-round game in the Minnesota State High School girls’ basketball tournament.

You see, your Chancellor has a daughter on the Austin, Minn. team. Rebekah Aase is a 6′ 1″ junior center for the Packers, who enter the state tournament with a 20-7 record. But she’s not the star of her team. There is no star for her team. This is not a team that relies on one player for a major portion of its points. Nine girls see regular action in every game, and six or seven of them have led the team in scoring in at least one game.

A gimmick defense like a box and one or a triangle and two is completely worthless against the Packers. A different player steps up each time to take the scoring load, as Jenny Fisher, Rebekah Aase and Kristina Vorpahl led the team in scoring in the Packers’ three tournament games. Brittney Gibson sank the three-point buzzer beater that clinched the state tournament berth after being scoreless for the first 33:58 of the game. And part of being a team is understanding that scoring isn’t the only way to contribute; for example, senior co-captain Tana Lukes had seven steals in the section semifinal win.

So here’s how the Packers have done it, and how they positively demonstrate the opposite of Lencioni’s dysfunctions.

Here are the video highlights (including Brittney’s Buzzer Beater) from the section title game:

To see more about the Packers and an application of social media (specifically Facebook) as a sports booster club, visit the Packers’ fan group and read about why Facebook groups beat blogs for this purpose.

Patrick Lencioni is now one of my favorite authors of business-related books. I previously reviewed his Silos, Politics and Turf Wars, and in the comments Val Sanford said The Five Dysfunctions of a Team had “transformed the leadership team in my previous company.” So I put it high on my Audible download list, for when my monthly credits became available.

In this leadership fable and the 40-minute theory discussion that follows, Lencioni outlines his model for what makes teams dysfunctional. In my next post, I will approach his five elements from a positive perspective, as they are exemplified by one of the best and truest teams I have every had the joy of observing.

This book is part of the core curriculum for Social Media University, Global not because it directly deals with social media, but because SMUG is about making practical business use of social media, because teamwork is essential to business success and because social media tools can greatly enhance teamwork and collaboration.

The social media tools themselves aren’t magic, though, and they’re not able to fix dysfunctional interpersonal relationships.

So, SMUG students, get this book! It’s well worth buying, but in keeping with our “everything is free” policy, you can check it out from a local library. And if you’re not yet a SMUG student, enroll now.