Yesterday was another of those days that seem to be getting more frequent, in which I met face-to-face someone with whom I had only interacted via social media.

I started the morning with a Tweet (which I also posted to my Facebook status via Tweetdeck), about my travel plans for the day:

To my surprise, a few minutes later a comment showed up from Roy Kenagy, who works with the public library system in central Iowa:

In fact, after a stop in Algona to interview one pair of patients, I was planning to be in Ankeny. So I replied via iPhone and he got me the address:

Which led to us getting to meet for about 15 minutes just before 2, and so I took a picture of Roy and his colleagues (Roy is the one in the middle!) 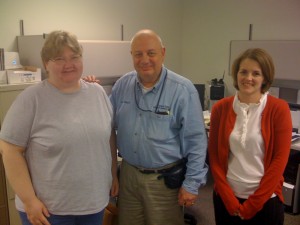 Another demonstration of the power of social media, particularly Facebook, to make virtual connections real.

I was in Ankeny to meet Marlow and Frances Cowan, the delightful couple whose piano duet at Mayo Clinic has become a YouTube sensation: 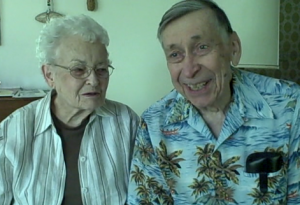 You’ll be seeing more of the Cowans in coming days, at which time I’ll be posting some more video and telling the story of how their duet has gone from 1,000 views to more than 1.6 million in a little over a month.

Later last night I got to have a good conversation with some health system communicators in Davenport. I’m uploading those photos to the SMUG Facebook group.

All in all, I have to agree with this assessment from Matt Feyen: