Communications and marketing professionals who are in charge of managing the social media presence for hospital systems frequently find themselves in a difficult position as leaders of specialty groups, residency programs and other entities within the system clamor for their own social media accounts that carry the enterprise brand.

In theory these accounts should contribute to overall organization reputation, but if they aren’t well managed they could dilute the brand through inactivity or even become flash points for controversy.

Back when I led the Mayo Clinic Social Media Network (#MCSMN), which brought together social media leaders and users from health care, we heard these concerns regularly.

Now as I’ve moved into a third career while also continuing to work in digital health in my of counsel role with Jarrard, Inc., I’m excited to be working on a project to help health care social media colleagues compare notes and perhaps identify best practices for managing these sub-brand accounts.

One of our Jarrad clients, Ashley Anderson of Cedars Sinai, has commissioned a research project to gather input from colleagues on how their organizations are handling social media governance issues. Some of the questions include:

Ashley plans to share the results of the survey with the participants, so all will be better equipped with data from peer institutions to help guide their internal governance discussions.

If you are responsible for managing social media in your hospital or hospital system, I hope you take a few minutes to participate.

It was 10 years ago this month that Minnesota Monthly, the magazine formerly published by Minnesota Public Radio, included me in its story called The Revolutionaries: 12 Minnesotans who are changing the way we think about the world—and its future.

I had started Mayo Clinic’s social media program as part of my role as manager for media relations, beginning with a makeshift podcast in 2005 and then branching into experiments with blogs and the various social networks.

I understood that as Mayo Clinic’s reputation had been built for 150 years through word-of-mouth, these platforms would be ways that word would spread between people in the 21st century.

Along the way I met up with co-belligerents as we created what would become the Mayo Clinic Social Media Network, and we even wrote a book called Bringing the Social Media Revolution to Health Care. Meredith Gould, Ph.D. was our editor, and besides Farris Timimi, M.D., my great friend and medical director for social media at Mayo Clinic, our contributors included

That was a magical time, as we experimented together and encouraged innovative applications of social media to promote health, fight disease and improve health care.

I have many fond memories from that revolutionary movement, and now I’m excited to help start another one through HELPcare and HELPcare Clinic.

Instead of a health care communications revolution, it’s a revolution in health care practice. My experience in the former has equipped me for this next one.

So has my personal health journey.

HELPcare is my new venture that provides metabolic health coaching, education and peer support for people who want to turn back the clock on their health through lifestyle changes.

In just its first month of part-time operation, HELPcare Clinic already has more than 200 members, and positive newspaper and TV feature stories in our local market.

I think the synergy between an affordable, membership-based medical practice that provides unhurried, unlimited primary care services in concert with lifestyle coaching that equips members to address underlying causes of disease will be powerful. 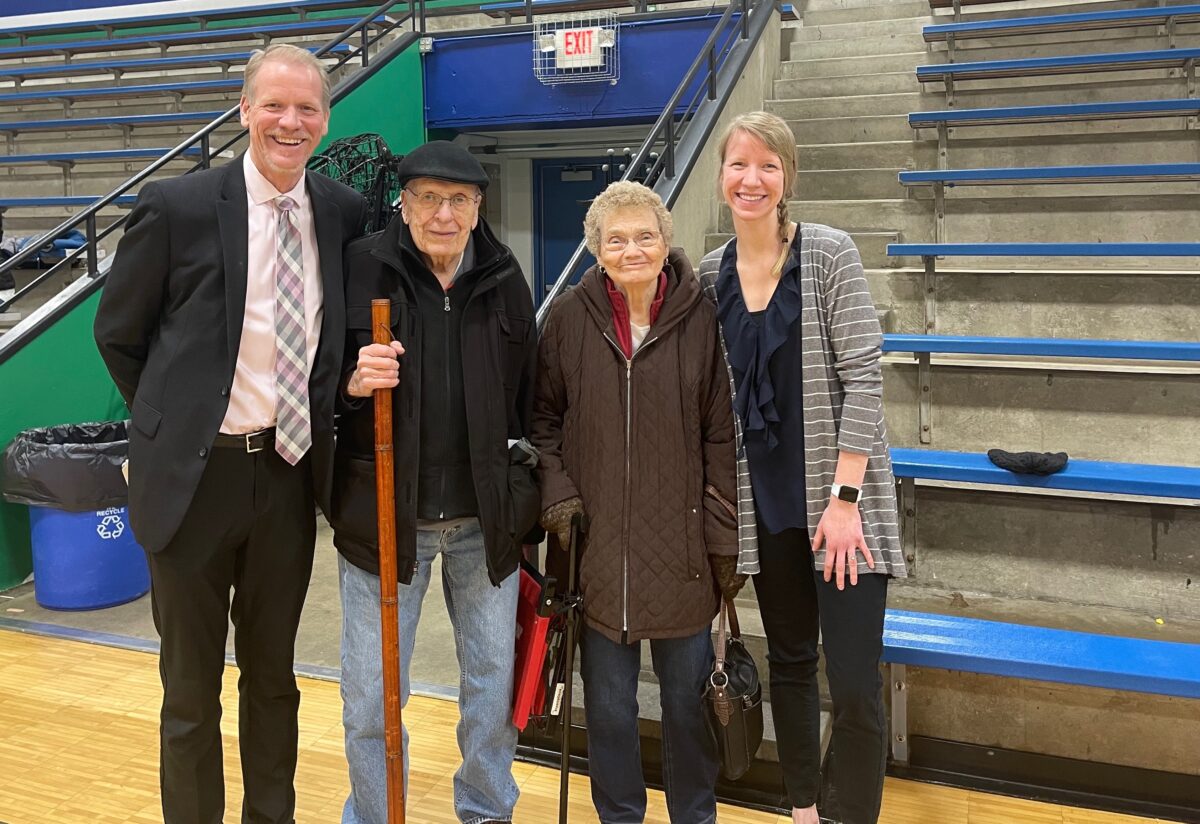 When my daughter Rebekah took a job as the girls’ varsity basketball coach for the Lyle-Austin Pacelli Athletics, she prevailed upon me to be her assistant (and JV coach), so since mid-November we’ve been having a lot of time together.

We’ve lost a lot more games than we’ve won this season, but last night we achieved our first winning streak, following Tuesday night’s win with a big comeback against the Schaeffer Academy Lions. After being down 30-15 at halftime, the Athletics girls went on a 25-1 run to start the second half.

Afterward, Bekah and I took a picture with my parents, Lew and LaVonne, who were there to watch their son and granddaughter coach a great-granddaughter.

The basketball season will be wrapping up in the next couple of weeks, so then I will be focusing on another type of coaching Lisa and I are doing as part of our new venture, HELPcare.

These services are available globally, but for people who become members of HELPcare Clinic they’re included at no extra charge.

HELPcare Clinic is the new direct primary care clinic I’m helping my good friend, Dr. David Strobel, open in our hometown of Austin, Minnesota. My new venture, HELPcare LLC, is contracted with HELPcare Clinic, his medical practice, to provide management services so he can focus on doctoring. We just opened last week.

This metabolic health coaching practice is built on what I’ve learned through my health journey over the last few years, and also the results Lisa has gotten. We started by coaching friends, and then the circle expanded over time.

I enjoy helping people discover their abilities to do more than they thought they could. It’s been really rewarding seeing people reclaim their health and even turn back the clock.

We feel better than we did 25 years ago, and are glad to help others looking to make similar changes.

And hopefully tonight we can make it three in a row for the Lyle-Pacelli girls!

Dr. David Unwin, a.k.a. @LowCarbGP, is a standout among my Health Sherpas. Over the last 9 years he has revolutionized his National Health Service practice just north of Liverpool, England by encouraging patients with Type 2 diabetes to adopt a low-carbohydrate diet.

Before his low-carb change, he had never seen that happen among his patients.

In the video below, Dr. Unwin shares several of those patient examples, as well as research that supports the assertion of his colleague, Professor Roy Taylor, which is the title of this post and of the video.

Some of Dr. Unwin’s key nuggets:

Dr. Unwin is unfailingly polite and understated in his delivery, which makes his conclusions all the more compelling.

I believe you’ll find this video well worth your time to watch and listen.

For more of his wisdom, see Dr. David Unwin on Cutting Carbs.

Building on our last few years’ experience and the results of our health journey, my wife Lisa and I are launching a new health-related venture next month, working with a friend who is a family physician. He shares Dr. Unwin’s concern about metabolic syndrome and his passion for equipping patients in making diet and lifestyle changes that can dramatically improve their health.

If you’re interested in learning about it, send me an email and I’ll be in touch to give you a preview.

While a low-carbohydrate ketogenic diet has been increasingly recognized as an effective way to lose weight, and while weight loss may be the initial motivation for many to embrace it, the health benefits are much broader and deeper than just weight loss.

As David Harper, Ph.D. says in the video below, keto benefits beyond weight loss include:

He also highlights several diseases for which strong evidence exists showing that a ketogenic diet is beneficial, as well as others for which the evidence is emerging.

I actually think that all of these chronic diseases…are all the same thing…. I think in the next 10 years you’re going to see a lot of medical research looking at the mitochondria…and that’s where we’re going to find the root cause of chronic disease.

Finally, he shares information about a study in which he is involved that is using a ketogenic diet in addition to customary therapies in women with breast cancer, and shows PET scans of these patients who have seen reduction in tumor size and extent.

Dr. Harper is the author of a book called BioDiet: The Scientifically Proven, Ketogenic Way to Lose Weight and Improve Health, which I ordered based on this presentation (as well as favorable reviews from two of my Health Sherpas, Nina Teicholz and Maria Emmerich) and expect to receive today.

Well worth your time to watch:

I retired in August from leading Mayo Clinic’s social media program to start a new venture with my wife Lisa and a family physician friend I’ve known since high school.

He has been interested in metabolic syndrome for more than 20 years, and with nearly nine of ten of Americans having at least one marker of metabolic ill health, he sees this as the major health challenge we face as a society.

Our mission is to help people take control of their own health through lifestyle changes. A low-carbohydrate diet as Dr. Harper describes is one key element.

I was motivated to launch this venture by our health journey from the last few years. Lisa and I have each lost more than 50 lbs. and maintained that weight loss for 18 months (so far).

For the last 10 months or so we’ve been coaching others in making similar changes, and they’ve experienced great results too.

We also have medical lab test results that show significant health improvements, and we feel better than we have in 20 years. It was really rewarding to see people we were coaching turning back the clock on their health, and I found myself saying, “I’d like to do this full-time.”

That’s why I say my August retirement was really instead the beginning of a third career. I worked at Mayo Clinic for 21 years in health care media relations and social media, after 14 years in politics and government.

I hope my third career will be longer and have more impact than either of the first two.

We’re currently in the Alpha phase of development, as we plan to offer educational resources, online community support and individual and group coaching.

If you’re interested in being one of our Alpha members who will help us shape and refine the services, send me an email and I’ll be in touch to give you a preview.