I don’t think this should really need lots of discussion and proof. In the era of Gutenberg and Luther, only the most profound works could be published via the printing press. Thus Luther’s 95 Theses and other works of eternal significance were candidates for mass distribution. Not much else was considered worthy of the expensive paper on which it would be printed.

And of course in those days mass distribution didn’t mean exactly universal distribution, but only to those who had the unusual opportunity and gift of literacy.

But even with limited literacy, Luther’s theses spread like a virtuous version of pandemic flu. They got people talking.

Over the ensuing 480 years or so, the ability to publish remained scarce and therefore precious. And for the last half century, there was a unique development in that a privileged class of editors and programmers could make tastes, and could decide what news was fit to print or worthy for airing.

So journalists attached to someone who owned a printing press, or (in the U.S.) an FCC-granted monopoly license, were unique in their ability to spread news and views to their community. News organizations sold their wares to consumers, or as Chris Anderson, Clay Shirky and others have noted, more accurately sold (or rented) their audiences to advertisers.

The economics of digital abundance and what Shirky calls unlimited perfect copyability, along with development of tools for self-publishing, means that we no longer are hostage to this privileged class. People like us can start a blog, or a podcast, or a YouTube channel that can be accessed from around the globe.

It doesn’t mean we necessarily have a huge audience for our views, but it does give us access, at least loosely based on merit, as judged by individuals instead of only the tastemakers.

The fact that only perhaps 10 percent of potential publishers actually avail themselves of these tools doesn’t lessen their significance.

In warfare the credible threat of force can be just as effective in accomplishing goals as the use of force is. Likewise, the fact that almost everyone has a digital camera at all times (thanks to the ubiquity of camera phones) means the potential cost of an organization treating someone badly is much higher.

In my presentations, I frequently illustrate this point with portions of the Social Media Revolution video, which begins with two questions:

Is social media a fad? Or is it the biggest shift since the Industrial Revolution?

While I agree the development of social media tools is as significant as anything since invention of the steam engine, the cotton gin and other outgrowths of the Industrial Revolution, I prefer to consider social media in the context of communications trends. In that regard, I believe it’s the biggest shift since Gutenberg. At least since Marconi.

In Thesis 3, I will discuss the anomalous (that’s a pretty sophisticated, Chancellor-like word, isn’t it?) nature of the mass media era, and why the era has ended, even as we continue to have mass media outlets in our communications ecosystem.

Meanwhile, here’s a screen shot from the Social Media Revolution video that puts it all in context in just a single frame: 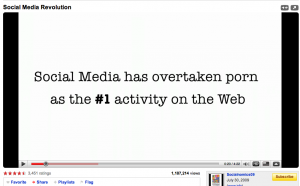 If you have 4:22 to spare, here’s the video in its entirety:

So how do you answer those questions? To what would you compare the social media revolution?