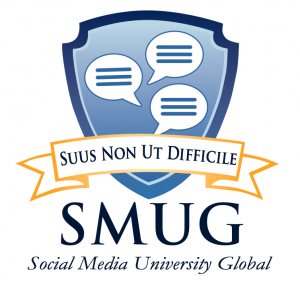 In July and August we held a contest, inviting SMUGgles to create a new official seal for SMUG, and then asking the “student body” to select the winner. In addition to the undying gratitude of SMUGgles everywhere (and there are now more than 800 of us representing every continent except Antarctica), I said the winner would be designated an Associate Professor of Graphic Arts. Today, I’m glad to introduce you to that new professor, Ruth LaGue. Here’s her bio:

Ruth is an Internet marketing consultant with 20 years of design experience. She excels at translating brands into visually engaging, integrated online experiences.

Ruth formerly worked as a senior art director at AGENCY.com: Boston. During that time, she was the creative lead on CIGNA.com, a multi-million dollar Web site that translated CIGNA’s brand online. She also was one of the creative leads working on projects for Liberty Mutual’s South American operations.

Her interactive career began at THINK New Ideas, where she was a senior designer and then an art director, creating Web sites and CD-ROM projects. Her clients included Fidelity, Evergreen and Progress.com.

Ruth received a bachelor’s degree from Rhode Island School of Design, and an MBA from Simmons College School of Management.

Thanks to everyone who was involved in the SMUG seal contest, whether it was in submitting candidate seals or helping to select the finalists and eventual winner.