When I was first diagnosed with celiac disease in March 2009, it was easy to focus on the sense of loss, that never again could I have foods containing wheat, barley or rye because of the presence of gluten.

No sourdough bread. No quick and easy fast-food burgers and fries.

And especially no croissants.

That’s one that still stings a bit to this day. I didn’t eat them often, but I love croissants. And there’s just no way to engineer a light and fluffy croissant without gluten to hold it together.

Switching quickly to glass-half-full mode, however, I soon began to emphasize the things I could eat, like steak and baked potatoes with sour cream. And it wasn’t too long until some more edible gluten-free breads became available, including the Udi’s line of hamburger buns, bagels

Those foods, combined with my newly restored villi increasing their absorption in my small intestine, led to me gaining more than 40 lbs.

In the last three years, I’ve become convinced that excessive carbohydrates were a major cause of weight gain for me and likely are for our society as a whole. So in addition to experimenting with intermittent fasting and time-restricted feeding, I’ve cut out sugar and have significantly curtailed carbs, particularly the highly processed ones.

In many ways, my celiac disease experience made the transition easier. It put me on a path where “anything goes” eating wasn’t an option. Lots of breads, pancakes and pasta meals were already off limits.

My original thankfulness for the celiac disease diagnosis was more related to what it wasn’t: my iron deficiency anemia could very well have been a sign of colorectal cancer. Indeed, for a high school classmate and good friend who also had anemia, it was due to somewhat advanced colorectal cancer.

I recognize that some of the dietary changes I have been and will be describing in this series may seem extreme. I also understand that’s even more so for those who haven’t had to deal with medically prescribed dietary restrictions.

So today I can say I’m totally thankful for my blessing of celiac disease. It jolted me out of the “anything goes” approach to what I eat, which was part of my journey to a low-carb lifestyle that’s delicious and healthy.

I’m at a retreat for work this morning where breakfast is being served, and while bacon and eggs would have been a plus, it’s amazing how satisfying nuts and berries can be. It’s a little higher in carbs than I would ordinarily eat, but the fiber in the whole fruit is a plus. 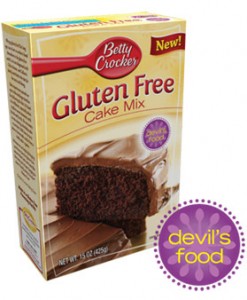 As she mentions in the video, Sheila works for General Mills, maker of Chex cereals and Betty Crocker mixes. As we got to know each other and I mentioned that I had celiac disease, she told me about the line of gluten-free Betty Crocker dessert mixes General Mills is developing. And when she returned for her check-up, she left a sample of these mixes (which I don’t think are generally available yet) in my office (I was away.)

Here’s a little video I shot tonight after taking one bite of the gluten-free Devil’s Food cake:

Again, I emphasize that the opinions expressed here are my own, and not those of my employer. But they’re also the opinions of my wife, Lisa, and my son, John, who each had a piece. I had two pieces.

I appreciate when large organizations like General Mills, Outback Steakhouse and Chipotle Mexican Grill make it a point to accommodate those of us with celiac disease. I’m glad for the niche players too, who have served the celiac community and provided resources. But it means a lot when bigger businesses offer gluten-free options that really taste good and are reasonably priced.

Update: In keeping with our Mayo Clinic policy on personal acceptance of gifts, I brought the rest of the cake to the office to share with co-workers. I also want them to see how good this is so they buy gluten-free products, so there will be more of them offered. 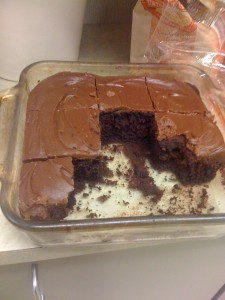 In many ways, SMUG has been my personal laboratory for learning about social media and how I can apply these tools to my work at Mayo Clinic. I’ve been able to experiment with blogs, Facebook, Twitter, YouTube and other platforms with my personal accounts, which then helps me see how they can be used for a health care provider like Mayo Clinic.

So we’ve established a Mayo Clinic YouTube channel, a Facebook page, and several podcasts and blogs — including, most recently, Sharing Mayo Clinic.

As of Friday the 13th, however, I’m also approaching social media from the patient perspective: yesterday I was diagnosed as having celiac disease.

So what did I do to find good information about how to cope?

My first step, of course, was the celiac disease section on MayoClinic.com.

And I recalled that my team at work had produced a TV story about living with celiac disease, which is also on our Mayo Clinic YouTube channel:

But I also turned to Twitter, and was amazed at the response.

@KimMoldofsky re-tweeted my call for help:

Bonnie Sayers (@autismfamily) alerted me to the #gfree hashtag and the Gluten Free Twitter Party she’s hosting on April 3.

@FrannLeach shared a Gluten Intolerance group on Squidoo, along with some recipes.

Kayla Eubanks (@BallinOnABudget) told me about Pizza Fusion, and Nina (@lovingyouiseasy) pointed me to @wholefoods and @KarinasKitchen. Karina’s “The Morning after the Diagnosis” post on her blog was particularly helpful. Kristie S. (@KristieTweets) had a couple of suggestions, and Tom Stitt (@tstitt) helped me get an answer as to whether Coke is OK (it is!) I also found out about lots of resources available at celiac.com.

And because I Tweeted about it, my celiac disease diagnosis also was posted to my Facebook profile: 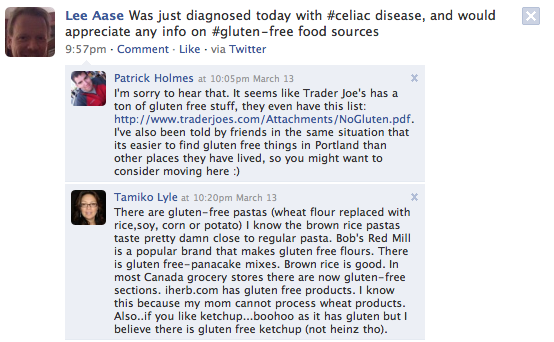 …which led to several Wall comments (including a couple you see above that came within a half hour of my Tweet), and also some messages in my Facebook inbox. And I also found a Celiac Disease group in Facebook.

Some people are justifiably concerned about potential dangers of self-diagnosis through the Internet, but once a diagnosis has been made, social media tools are extremely powerful means of getting information and gathering support.

As I write this, I’ve had my diagnosis of celiac disease for about 34 hours, and the learning about the condition I’ve been able to do in this time has been amazing.

And out of this experience, I’m also going to be getting my wife Lisa (@LisaAase) to use her Twitter account to participate in the #gfree discussions. She set up her account nearly two years ago, but has only done a dozen updates. And right now I’m her only follower. But now she has a reason to use Twitter, and I think she’s going to find it helpful in learning how we deal with gluten in our family diet.