A couple of changes made or announced this week suggest that “Like” and the associated thumb icons will become the standard for ratings.

First, Facebook announced that it will no longer be using the “Become a Fan” lingo for users to indicate affinity for Pages. Instead of becoming a Fan of Mayo Clinic on Facebook, for instance, over the next few weeks you will be offered a chance to “Like” Mayo Clinic.

Advertising Age has a good analysis of the implications. I think the article’s conclusion about what it means for organizations is right: it’s one thing to say you “like” an organization, and another to say you’re a “fan.” So we may see what Facebook now calls “connections” but they will be less of an indication of intensity of feeling.

Which leads to yesterday’s significant change on YouTube. Among the other elements rolled out in the site refresh is a move away from the five-star rating to a simple thumbs up or thumbs down. 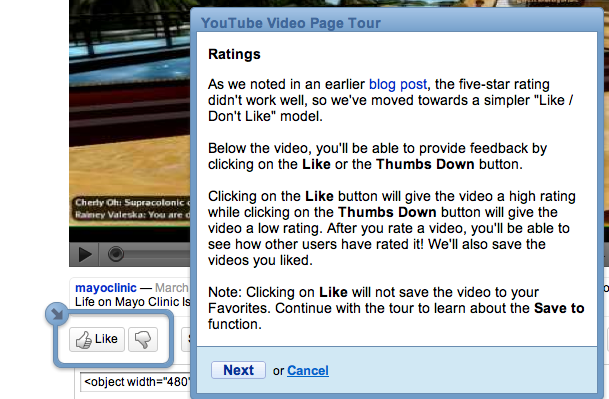 Google explains that as it analyzed what ratings were actually used, the curve was pretty heavily weighted to the five-star end:

So they decided to just go with the “Like” or thumbs-down option. People who want to express themselves further can use the video comments, or if they want to indicate a stronger “Like” they can make a video a Favorite.

So, for instance, in this video of our famous piano duo from Ankeny, Iowa:

When you view it on the YouTube site you will see this little icon giving you the chance to rate:

When you do, you get to see how others have rated: