Note: This is the Aase family’s 2009 Christmas letter, but with a special twist relating to a major milestone we’re observing today.

Lisa and I have so much for which we are thankful, as God has blessed us so amazingly. The events of 2009, some of which I will recount below, have been mind-blowing. But this also is a significant year for us as a couple, and today is a particularly momentous day, as we celebrate our 25th wedding anniversary. In frequent flyer parlance (you’ll understand the reason for me using the analogy in a bit), I guess that’s the marital equivalent of “Silver Elite” status.

On December 22, 1984 we stood together in front of St. Peter’s Lutheran Church in New Richland, MN, after our wedding: 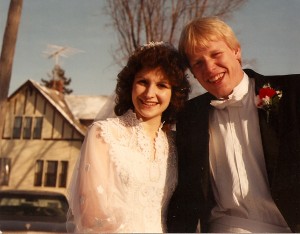 A quarter of a century later, she’s every bit as beautiful as she was on that bright and snowy day. 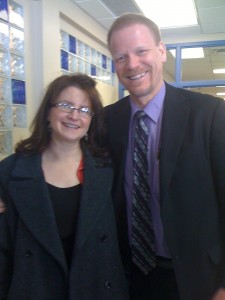 We’ve been blessed not only with each other, but with six delightful children, a son-in-law and a granddaughter. And earlier this year, when we were visiting Grand Rapids, Michigan for Evelyn’s first birthday, we learned that she had a sibling on the way. Here’s how Rachel and Kyle decided to spring the news to us, using Aunt Rebekah as the foil:

We found out this month that “Thermie” is a boy, and his name will be Judah Scott. Here’s one of his first baby pictures:

In other late-breaking news, we got a call from our oldest son, Jacob, on Saturday night. He announced that he had popped the proverbial question to Alexi Iler and they are now engaged. No date has been set, but we’re looking forward to welcoming her to the family sometime next year.

Rebekah and Ruth graduated from high school and Riverland Community College this year, and moved on to continue studies at University of Wisconsin-La Crosse, where Rachel and Jacob had both graduated. They live in a house just off campus. The girls are planning to go into nursing, and Jacob is going back to school to become a physical therapist, and so Bekah and Jake were in the same Chemistry class this fall. That was kind of neat. And I guess Jake has been spending a fair amount of time visiting his sisters, although the fact that Alexi is one of their housemates may be a contributing factor.

We had a great trip to Indianapolis in July for the National Bible Bowl competition, as the team led by Ruth but also including Rebekah and Joe took fifth place. You can read about that trip here, here and here.

Joe went to high school this fall, so John is the only one Lisa is still home schooling. Joe is adjusting well academically, and as a 6’5” freshman is playing with the sophomore basketball team. While Bekah and Ruthie made the transition from home school to high school seem stressful, Joe requires much less maintenance. He’s a pretty easygoing guy. It probably comes in part from being the fifth of six kids.

John is our youngest (11), and earlier this month he and I developed another thing in common: he was diagnosed with celiac disease. I was diagnosed with celiac disease in March, after about 20 years of intermittent IBS-like symptoms. What got us looking in my case was iron deficiency anemia discovered when I tried to give blood. We were thankful the anemia wasn’t due to colon cancer or something else that involves internal bleeding, but it’s been an adjustment to not be able to have wheat, rye or barley products. If you want to know more about this disease, check out this celiac disease post on our Mayo Clinic News Blog that gives background and also some recent Mayo research.

Anyway, we would never have suspected celiac disease in John if I hadn’t been diagnosed, but since it’s hereditary and since he was having some intestinal symptoms, we got him tested. Joe is in the clear, but over the next few weeks we’re going to get the others screened, too.

This year has been an amazing one for me from a career perspective. It started with the launch of our Sharing Mayo Clinic blog in January and a couple of external presentations about social media during the first quarter of the year. Then in April the Minneapolis Star Tribune ran this Sunday piece about our social media work at Mayo, and I also was interviewed for this Good Morning America story about Twitter in healthcare, and things really took off.

It was earlier that month that I had discovered the now-famous video of a delightful older couple playing the piano at Mayo and embedded it within Sharing Mayo Clinic. That kicked off an interesting journey that included me getting a chance to visit and interview them in their home in Ankeny, Iowa, and also to be with them when they played their duet live in the Times Square studio on ABC’s Good Morning America program in New York. It was great to get to meet Sharon Turner, the patient who shot the video, and her daughter, Jodi Hume, who had uploaded it to YouTube, as well as the Cowans’ daughter, DeDe Shour. As I write this, the video has been seen more than 5.3 million times on YouTube.

I traveled a lot this year to spread the word about what we’re doing in social media at Mayo Clinic, and to encourage people in health care and other industries to join the fun. I got to visit Carlsbad, Orlando, Baltimore, Philadelphia, Indianapolis, Chicago, San Francisco, Omaha, Oklahoma City, Milwaukee, New York, Phoenix, Scottsdale, Idaho Falls, Las Vegas, St. Louis, Miami, Boca Raton, London, Amsterdam and Nijmegen (the Netherlands), among others. Between travel and webinars, I did 70 presentations on social media for external audiences in 2009. One of the best parts of this was getting to meet so many people in person (or as we say in social media, IRL – “in real life”) after having first made connections on Twitter, Facebook or SMUG.

Speaking of SMUG, we’ve had an interesting year here, too. It’s hard to say what our “enrollment” is since we don’t charge tuition, but we’re on the verge of 800 “SMUGgles” who have joined the SMUG group on Facebook. The posting of my 35 Social Media Theses on the 492nd anniversary of the day Martin Luther nailed his 95 Theses to the church door at Wittenberg was a highlight, and I hope that in 2010 we will continue to see a social media Reformation in healthcare. I have some ideas in mind for how to help drive that. Stay tuned.

As I write this, we’re enjoying having Rachel and Evelyn at “Old Main” for the week (they flew in yesterday, thanks to frequent flyer miles accumulated a couple of paragraph back), and we expect Kyle will arrive by car tomorrow. We have much to celebrate, and Lisa and I look forward to having the whole family together as we remember Jesus’ birth and also think back not only on the blessings of this year, but also a quarter century of marriage.

We expect 2010 to be quite eventful, with Judah’s arrival and Jacob’s marriage as high points. I’m also approaching my 10-year anniversary of starting work at Mayo Clinic. We hope to avoid any more serious disease diagnoses, but we’re certainly not taking our health and other blessings for granted.

This afternoon’s events provided a vivid reminder of that, as we had a near-inferno caused by Joe plopping his backpack on our kitchen table, near some candles. Here are the charred remains of the paper Joe needs to turn in at school tomorrow: 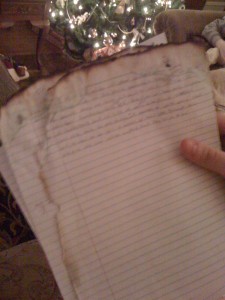 The backpack itself was a total loss, and as you’ll see in this video, the table isn’t doing that well either. We’re thankful it wasn’t worse, that Ruth was there to notice the problem and that Rachel was able to douse the flames (after Ruth had fanned them.)

We’re glad Old Main is still standing, and all decked out for a Christmas celebration. 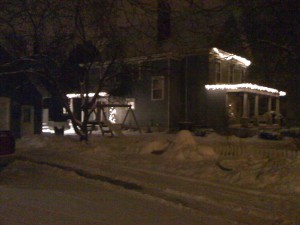 Merry Christmas and best wishes for 2010!