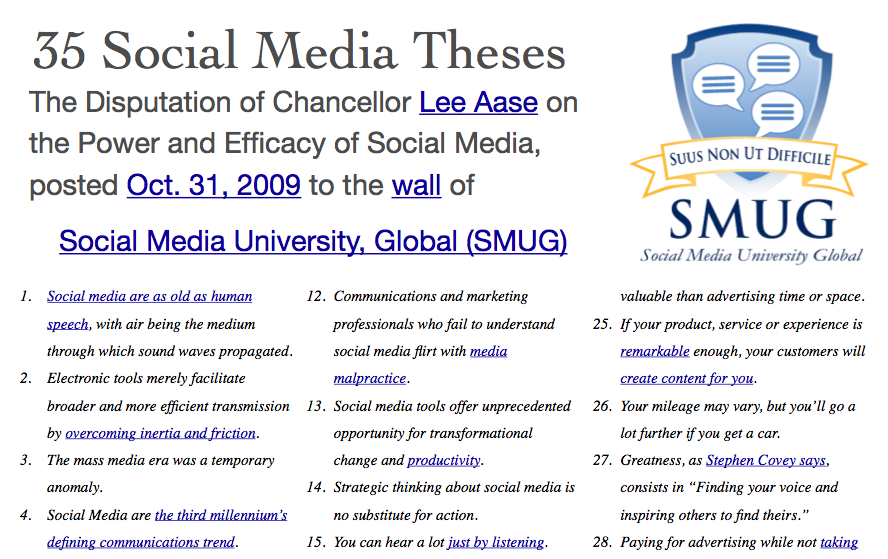 Mayo Clinic’s announcement of the creation of the Mayo Clinic Center for Social Media was 11 years ago next Monday.

With the Mayo Clinic Social Media Network (MCSMN) site sunsetting on July 31, today I’m starting a 10-installment series to tell the MCSMN story and to share some memories and insights with and about this global community I’ve been blessed to help lead, in partnership with our Medical Director for Social Media, Dr. Farris Timimi.

Between now and my Aug. 3 retirement from Mayo Clinic, I’ll be doing daily posts (except Sundays) looking at the origins, mission and accomplishments of MCSMN as I have seen them.

I also want to recognize and thank people who have played important roles, either as part of our staff or as co-belligerents in our mission of Bringing the Social Media Revolution to Health Care.

Today it seems normal and natural that hospitals would be actively engaged in social media platforms. That certainly wasn’t the case a dozen years ago when a small community of like-minded activists started to gather online and also found opportunities to meet face-to-face.

I had been blogging personally since July 2006 and was exploring how blogs and social media could help me do my job as manager for media relations at Mayo Clinic more effectively. As I attended communications and health care conferences I live-blogged the presentations and shared my perspectives, and over time was invited to speak about how we were using these tools at Mayo Clinic.

I renamed my blog Social Media University, Global (SMUG) in January 2008, which created at least a pseudo-academic motif to shape my observations. Another major inflection point came on October 31, 2009 when I emulated Rev. Martin Luther and posted my 35 Social Media Theses on the 492nd anniversary of his theological declaration.

We had lots of good examples of early success in using social media at Mayo Clinic, and I’ll be reviewing many of those in coming months in the My Career Journey series. A few of the key ones included promoting a discovery of a type of wrist ligament tear as well as the procedure to repair it, a viral piano duet in the Gonda Building atrium by a delightful elderly Iowa couple, and using the Flip camera for nimble sharing of news.

Between early 2008 and December 2009 I shared our stories, practices and my perspectives in more than 560 blog posts and delivered presentations in nine states. The last several months of 2009 were kind of magical, including an opportunity to keynote the 2009 Healthcare Internet Conference at Caesar’s Palace in Las Vegas. I also had my first opportunity for an international presentation as the great Lucien Engelen invited me to speak at his Zorg 2.0 conference in the Netherlands.

It was during that time I also made connections with and met some key colleagues including Reed Smith, Ed Bennett, Chris Boyer, Dana Lewis, Meredith Gould and Dave DeBronkart. Those face-to-face meetings led to some great conversations and developing a shared vision of what social media could mean in health care.

Dana had started the weekly #HCSM Twitter chat, Ed had created the online list of hospitals using social media, and Reed was actively encouraging social media from his position with the Texas Hospital Association. Dave was bringing the voice of the ePatient to the fore. I met Chris at Healthcamp in the Twin Cities where we had a chance to discuss why Mayo Clinic’s non-standard use of Twitter made sense for us at that time, and Meredith and I bonded over my left-behind Flip camera.

This surge in social media interest in late 2009 led me to begin thinking about what an expanded Mayo Clinic commitment to social media would look like, as well as how Mayo Clinic’s leadership could encourage other health care organizations to take the plunge. In tomorrow’s post I’ll tell the story of how and why we created the Mayo Clinic Center for Social Media and the Social Media Health Network, which later combined to become MCSMN.

Given the impending retirement of the MCSMN site, I hope this blog post series will serve as the repository for gathering memories about the evolution of social media in health care. If you have a memory or perspective to share, I hope you’ll do that in the comments below.