Last week Paul Levy, one of the early hospital CEO bloggers who is now blogging at Not Running a Hospital, came across what he thought was a significant issue with Google’s new medical search knowledge panels that incorporate information from Mayo Clinic and other sources. 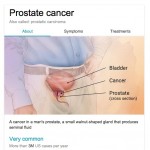 The main issue he raised related to the Prostate Cancer panel, and particularly that robotic surgery was listed first among surgical procedures (instead of alphabetically), with watchful waiting listed among “Other treatments” under the “Also common” heading. Or as he put it:

Open the prostate cancer search in a new window and review the panel for yourself. Then come back here for some thoughts. I’ll wait.

Since he published his post, Mr. Levy has tweeted about the topic at least 15 times, starting with this one..

Also, on Saturday Mr. Levy published a related post, this time asking whether Mayo reviewed the “Ad” about Multiple Sclerosis, and questioning its accuracy.

Since he specifically mentioned me in the first post, and because I work at Mayo Clinic, I looked into the process. Far from being anything sinister, I think it’s a really positive educational service that puts reliable health information at the top of Google’s health search results, above any advertising.

Here’s how I understand what’s happening:

Back to Mr. Levy’s question…

The reality is, these panels do contain direct deep links to Mayo Clinic’s view for all 400+ diseases and conditions, ranging from ADHD and ALS to Heart Attack, PTSD and viral gastroenteritis.

And yes, prostate cancer too.

I’m more mystified at Mr. Levy’s criticism of the MS panel, especially as expressed in this tweet:

Silence from @MayoClinic on how Google search is impairing its credibility: http://t.co/3b1EBmed2B Who's got quality control in this deal?

The issue he raised is with the number of cases:

Mr. Levy says he did some searching in the National MS Society Web site and found that the estimated number of cases worldwide (his emphasis) is only 2.3 million. But here is the quote in context:

More than 2.3 million people are affected by MS worldwide. Because the Centers for Disease Control and Prevention (CDC) does not require U.S. physicians to report new cases, and because symptoms can be completely invisible, the prevalence of MS in the U.S. can only be estimated. The Society continues to advocate for the establishment of a national registry that will track the number of people living with MS and has made a commitment to re-evaluate the current prevalence estimate and investigate the process by which an updated estimate can be identified. (Emphasis mine this time.)

The Google Knowledge Panel, which Mr. Levy says is “impairing Mayo Clinic’s credibility,” puts the number of U.S. cases of MS in the 200,000 to 3 million range. This WHO report estimates the prevalence at 135 per 100,000 population in the U.S.

That would put the number of cases in the U.S. at something well over 400,000. And the MS Society seems to indicate (from the passage quoted above) that U.S. cases are likely understated.

The Google Knowledge Panel uses four classes of disease prevalence, based on number of U.S. cases:

The categories are admittedly broad: Ebola is accurately in the Very Rare group, although the number of U.S. cases is way below 20K. It’s less than 20.

The range is big, but it’s not wrong.

Finally, these Knowledge Panels would have happened with or without Mayo’s participation. We had the opportunity to share some of our knowledge via the definitions. We provided content review to help ensure that accurate, reliable health information appears at the top of search results, and and we offered direct links to deeper information on MayoClinic.org. We started with 400 medical topics and plan to work with Google to add up to 600 more.

I hope these answers to Mr. Levy’s questions are helpful.

I’m confident that the panels themselves will be.

That’s the most stunning statement in a Brookings Essay “The Bad News about the News” by Robert G. Kaiser, who worked for a half-century as a writer and editor at The Washington Post. He outlines the fundamental problem of the challenge digital presents to “legacy” media:

Overall the economic devastation would be difficult to exaggerate. One statistic conveys its dimensions: the advertising revenue of all America’s newspapers fell from $63.5 billion in 2000 to about $23 billion in 2013, and is still falling. Traditional news organizations’ financial well-being depended on the willingness of advertisers to pay to reach the mass audiences they attracted. Advertisers were happy to pay because no other advertising medium was as effective. But in the digital era, which has made it relatively simple to target advertising in very specific ways, a big metropolitan or national newspaper has much less appeal. Internet companies like Google and Facebook are able to sort audiences by the most specific criteria, and thus to offer advertisers the possibility of spending their money only on ads they know will reach only people interested in what they are selling. So Google, the master of targeted advertising, can provide a retailer selling sheets and towels an audience existing exclusively of people who have gone online in the last month to shop for sheets and towels. This explains why even as newspaper revenues have plummeted, the ad revenue of Google has leapt upward year after year—from $70 million in 2001 to an astonishing $50.6billion in 2013. That is more than two times the combined advertising revenue of every newspaper in America last year. (Emphasis added.)

Some other interesting nuggets:

Kaiser’s essay does a good job of outlining the challenges faced by the big media, which is probably its most significant contribution. It’s short on solutions, but then again, that’s the real issue for the established media: if answers were apparent, the financial situation for newspapers would not have deteriorated to the extent he describes.

It’s not exactly cheery reading, but it’s at least a little less depressing than the latest news about Ebola and ISIS. Read the whole essay.

It’s also interesting for me to read this, because much of my early blogging was about trends in media, given my background in media relations. Here are a few related posts over the years:

Or you can browse through all of the related posts here.

Today I am presenting the third in a monthly series of adult education social media workshops through Rochester Community and Technical College. The first was an introductory overview session, and in the second we took a deeper look at Twitter: Social Media’s Gateway Drug.

Here are my slides. Note that many of the slides contain links to the referenced Web sites.

Social Networking: From Facebook to LinkedIn and Beyond from Lee Aase

Google and other search engines have indisputably made our lives richer and easier, which is why Googling has become a verb (Microsoft could have chosen a better name for its search service, because Binging just doesn’t sound right.) Type in a phrase, find the information you need. Simple. Fast.

But what if the answer to your question doesn’t show up on the first page of search engine results?

That’s where the power of social networks can help. Real people helping you in real time.

I had such an experience earlier this week, when I noticed that the Calendar app on my iPhone was no longer there. I must have inadvertently deleted it. I went to iTunes and looked for it to reinstall, and couldn’t find it. I went to the iTunes store and searched for Calendar and got the opportunity to buy some other apps, but couldn’t get the one that came with my phone.

So then I searched on Google to no avail, or at least not quick enough avail to provide the instant gratification to which I (and I’ll bet most of you) have become accustomed. I clicked through a few of the search results and got nothing that told me what I needed to do.

So I went to Yammer.

Yammer is an internal social network limited to people who share your email domain. In my case, at Mayo Clinic, it’s a network of everyone with email addresses ending in mayo.edu.

So I went to the iPhone User Group in our Yammer network and posed the question. Here’s the whole conversation: 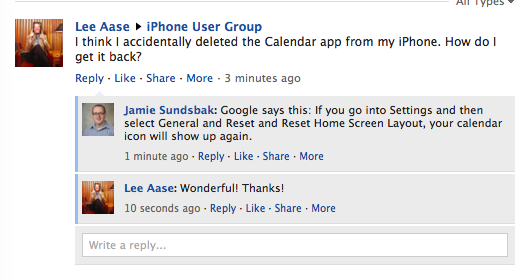 Start to finish, I got the answer in two minutes! And yes, it worked perfectly.

OK…so Jamie used Google to find the answer. Maybe he’s just better at phrasing his queries, and there is nothing wrong with Google.

But my point still holds: a social network can connect you with people who can help you find your answers.

If you’re interested in learning more, check out the Yammer curriculum section on SMUG.

Last week I shared a video from David Allen on Getting Things Done, or GTD.

Here’s some more Saturday viewing from another author who has taught me a lot: Seth Godin. He even has his own section among the SMUG-recommended textbooks. Seth is speaking to employees at Google, and for those who haven’t read his work, it’s a good introduction:

Check out Seth’s blog, too.