In a conversation last week, I found the phrase that is the title of this post tumbling out of my mouth, and so I thought I must have heard it somewhere. Couldn’t have been original.

So of course I did a Google search to see who had said it. It turns out Google’s autocomplete function suggested “anonymity is the enemy of civility” and linked to an article in Fast Company by Seth Godin.

Many of my best ideas are probably inspired at least subconsciously by something I’ve heard or read from Seth. If by some chance you’re not familiar with his work, get a sampler.

So at least the ghost of Godin likely inspired my observation of the enmity between anonymity and community.

My formulation came up in a discussion of our early Mayo Clinic experience with our Facebook page. In the first year of its existence, from late 2007 to January 2009, we had exactly one comment I would consider negative, out of a little more than 100 overall wall posts. These were the earliest days of organizations or brands being on Facebook, and so the comment volume was light.

Of course back then we had only about 3,000 of what were then called fans, and now we have nearly 100 times as many “likers” of our page.

I see three main explanations behind the high percentage of positive comments on our Facebook page:

Anonymity is like alcohol. (Now there’s one for which I think I can claim originality, notwithstanding any relation to the famous 12-step program.) Alcohol removes inhibitions, which makes people tend to behave in a way they later regret when they sober up and have to face the consequences of bad behavior. Likewise, anonymity makes people more likely to be irresponsible in their online speech.

In the pre-Facebook era, the Internet was a lot like a drinking establishment. Not like Cheers, where everyone knew your name, but more like a rowdy biker bar with heated arguments, name-calling and the electronic equivalent of fisticuffs.

So my thesis is that online anonymity is almost never helpful, and that the “real names” movement essentially started by Facebook has been an important factor in making the Internet safe, civil and more community-oriented.

What do you think? What are the exceptions? When does it make sense to allow people to not use their real names in an online forum? When do other needs trump the need for community?

A Facebook group is like a garden, to borrow an analogy from Chance, the Peter Sellers character in Being There. It will not grow properly without cultivation.

Because a group is so easy to create, billions have been formed. Facebook currently has 400 million active users, and the average user is a member of 13 groups. Do the math.

The vast majority of Facebook groups have precious little activity.

As a group administrator, you have tools at your disposal that the other members don’t have, and which are crucial to keeping the group vital and active.

First, you can Message All Members by picking this in the left navigation: 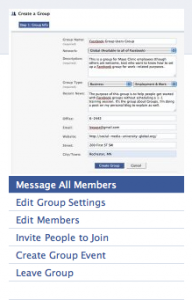 This enables you to send a message to the Facebook Inbox of all group members. A good time to do this is when there is a Discussion Board topic or Wall post for which you would like their feedback…or a new video that has been uploaded, or a new event created.

So when I created the Facebook Group Users Group, I used Message All Members to send this message (click to enlarge):

Which looked like this in my Inbox when I received it: 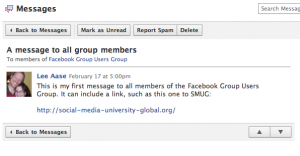 This is a way to keep your group top of mind among members. Don’t abuse it by sending too many messages; otherwise your group members will leave. But if what you are sending is meaningful and worthwhile to them, they will welcome it.

Your goal should be for the group to be useful to its members. If you are sending a message just to keep the group going, and not to help your members, that’s a sign you’re doing it for the wrong reasons. And your members will sense it.

Remember, the group doesn’t exist for itself; it exists for its members.

You also may want to Edit Members of your group to designate some of them as Officers or Admins. 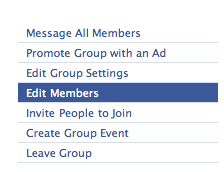 Be careful with your designation of an Admin; these individuals will have the same rights with the group as you, the creator, do. But you may wish to have at least one additional trustworthy person as an Admin.

Officers, on the other hand, can be multiplied. By designating officers with any range of titles you can enable group members to find the person who may best be able to answer questions. In an academic program interest group, for instance, you may have someone other than the group creator designated as Program Director or Admissions Counselor. Or if you were to use Facebook as an online newsroom, you could indicate what specialty beats a particular staffer covers. In this way, a member can send a private inbox message in Facebook to a designated officer, such as a journalist identifying the staffer who covers the cardiology beat.

Then when you look on the front page of the group, your officers will be listed, so interested members or visitors can know which person they should contact. 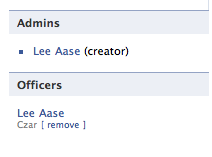 I don’t know what I was thinking when I did this originally; I can’t believe I chose “Czar” as my office instead of “Chancellor.” I’ve since fixed that.

In my opinion, having an active group in Facebook requires an Admin who is committed to regularly adding content that is useful to members, and who takes time to reach out and remind members of the new content (without overdoing it and causing people to leave the group.)

What’s your experience? How else do you create community in a Facebook group?

This afternoon I’m presenting at the Community 2.0 conference in San Francisco. I’ve embedded the slides below.

Here are a few of the links to posts mentioned:

The story of Sharon Turner and her daughter, Jodi Hume, who shot that video.

The story of Anne de Bari and her husband Tony.