Kelley O’Brien (@kelleyob) from North Carolina posed the following question via a tweet this afternoon: 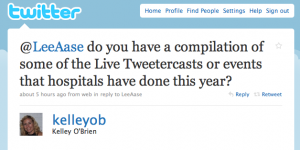 A. I’m not aware of anything like a comprehensive list of hospital Twitter chats. Ed Bennett’s Hospital Social Networking List is a great resource to tell us which hospitals have social media presence, and he even has some great hospital Twitter lists by state, but the list doesn’t include specific projects (such as surgical cases being “tweeted” that have been undertaken by hospitals or healthcare organizations.

But the great thing about social media is that you can build a list pretty quickly by crowdsourcing…via Twitter.

Or at least I think we can. Let’s see!

I’m listing below some of the Twitter chats/events I’ve been involved with through Mayo Clinic, along with some others I’m aware of that others have done.

It’s not even close to exhaustive. But that’s where you come in. If you know of hospitals that have done Twitter events, whether it was related to a surgical procedure, or a communications crisis, or promoting research findings, or whatever other ways you’ve used Twitter (or seen it used) in a hospital setting, please tell about it in the comments below.

Please include the name of the hospital, its Twitter handle, a relevant link to a post, news release or news story describing the effort, and any description you would like to add. Also please indicate which category (listed in bold below) is appropriate. And if you think I’m missing a category that should be added, please tell me that, too.

You also can share your examples via Twitter, using the #HospitalTweets tag. But by adding them in the comments below, they’ll be more permanent (since Twitter doesn’t archive tweets)…and of course, you’re not limited to 140 characters.

Let’s see how quickly we can come up with a really good list!

What other examples can you add?

I saw yesterday that the University of Minnesota had developed a text-messaging system for quick notification of students, faculty and staff in the event of a campus emergency. Then today in my list of Facebook groups recently joined by my friends, I saw that they have a Facebook group for the same purpose.

I think this is an excellent use of technology for crisis communications. I’ve written some ideas about how Facebook could be used, and also Twitter. As Dennis McDonald recommends, you need to have multiple means of spreading the word in a crisis, because no one method reaches everyone. It’s great to see that the University of Minnesota has a comprehensive plan like this.

I think the dedicated text-message service is a really good idea, and may be preferable to Twitter for this application, because it will only be used for emergencies. I’m working with a crisis-planning group, and we’re experimenting with Twitter as a first step for a text-messaging system to alert the core crisis team. It’s a great solution for people who are just being introduced to Twitter and who don’t feel a need follow others’ tweets, because they can link their account with their cell phone, follow only the crisis communications Twitter account and have the notifications set to “on.” They will only get a text message in the event of an emergency.

For me, as someone who is already Twittering and following a few dozen people, having my notifications set to “on” would keep my cell phone buzzing all day. So I typically just check in with Twitter once in a while on the web. I want text messages I receive to be higher-priority and worthy of interruptions (especially since I’m paying for them.) But I haven’t found a way to choose which Tweets I get by text, and which just go to the web feed.

Ideally I would like to just have some tweets come by text (such as those from the crisis management account.) Does anyone have a way around this? I have a couple of ideas:

I would appreciate any guidance on this that anyone can offer, because I would like to have Twitter be the text-notification service for our crisis plan (since it’s free.) But if it becomes more widely used among my non-geek colleagues and they start “following” multiple accounts and not just the crisis account, they may end up turning off the text notifications, which would defeat our purpose.

Crisis communications plans, as I said earlier and as Dennis McDonald agrees, should have some kind of social media component, whether they use Facebook or Twitter or some other way of delivering text messages, along with “dark site” blogs.

The main idea is to build in multiple levels of redundancy for your communications, because no one method gets to everyone, and you can never trust in just one delivery mechanism because you need to account for the possibility that your primary means may be knocked out.

In a college environment, though, Facebook and texting via cell phone come close to being universal delivery methods, as St. John’s University and UW-Madison showed last month.

When a masked freshman came to campus at St. John’s University with what police said was a loaded rifle sticking out of a bag, the school alerted students via cell-phone text messages within 18 minutes.

I think that with the growth of social media sites like Facebook, and with high-profile examples of success like this, these methods are going to go from being back-ups and nice add-ons (like a belt and suspenders), to becoming the main way people communicate quickly in a crisis.

Too many people look at the latest social media gadgets and can’t get beyond first impressions and what’s on the packaging.
They see the “What are you doing?” interface at the top of Twitter and they say, “How pointless and narcissistic is that?” “Who cares what I’m doing right now?” And “Why would I care what you’re doing?”

Or they see the “poke” lingo in Facebook and can’t imagine serious business uses.

They miss the point. It’s not about the initial application as envisioned by the developer; it’s about what you can envision as an implication of the application.

To paraphrase Ted Kennedy eulogizing his brother Bobby: “Some men see Twitter as it is and say ‘Why?’ I dream new uses for social media and say, ‘Why not?'”

These aren’t like pharmaceuticals that should be used only as directed. Off-label use is fine.

For example, Twitter could be one way to rapidly alert an emergency response team that they have been activated. You could create a Twitter account called “Your company alerts” and have all of your key staff subscribe to cell phone alerts from that account. You wouldn’t use the account except in an emergency.

But then, when a disaster strikes, you would have Twitter as one way of getting the word out. As Dennis McDonald recommends, you wouldn’t rely on it as your only means of communication, but it could potentially shave several precious minutes off the time it takes to reach everyone. You could use Twitter to send a message like this to get your team to participate in a crisis activation call:

At the same time, you could start working through your old-fashioned phone tree until you know that the message was successfully delivered.

Likewise, you could create a secret Facebook group called “Your Company Crisis Management” and have all of your key staff join. Then, when a disaster hits, you could use the Message All Members function to blast an alert to everyone (which may include sending text messages to some), and you could use the Wall and Discussion Board to post information your team needs and to clarify issues.

This kind of group could remain invisible to the general public; you could create a companion site (or a blog) very quickly for public interactions.
I’m quite certain that neither Facebook’s Mark Zuckerberg nor Twitter founder Biz Stone envisioned this kind of use for their applications when they began developing them.

What kind of “off-label” uses for social media have you found?

Highlights of the last week: