I’m settled in for a fun night watching the fifth and deciding game of the National League Division Series, and I have a definite rooting interest since Jayson Werth hit the game-winning home run in the bottom of the 9th last night.

Jayson thought his career was over in 2005, but Mayo Clinic Orthopedic Surgeon Richard Berger, M.D. helped make his return to baseball possible.

Dr. Berger had discovered the kind of ligament tear Jayson had suffered in spring training in 2005. it is called a UT split tear and involves lengthwise split of the ligament, like a celery stick, as opposed to a complete rupture. Before Dr. Berger’s discovery of this type of injury, patients would never recover mostly because the injury doesn’t show up well on an MRI. It looks “normal” unless you really know what to look for.

Here is that story, as told on our Sharing Mayo Clinic blog, from when he was with the Phillies in 2009.

I met Jayson in 2009 when I got to interview him in Philadelphia:

That post led to a big story in USA Today when the Phillies went to the World Series again in 2009. It resulted in our first Twitter chat in collaboration with USA Today, in which Dr. Berger answered questions from readers, which led to one of those participants coming to Mayo Clinic for surgery by Dr. Berger for the same surgery, because she had a split-tear too. And that led to another USA Today story.

Two years ago in December, Jayson signed with the Washington Nationals, perennial cellar dwellers. Here’s a story about it in the New York Times, which gets into a lot of his Mayo Clinic story.

It’s neat that in just two years, Jayson is again playing post-season baseball. If my Twins can’t make the playoffs, I’m rooting for the Nationals.

And just in the time since I started writing this post, the Nats are off to a 3-0 lead in the first inning, as Jayson led off with a double and scored the game’s first run.

In several previous posts here on SMUG and also on the Mayo Clinic News Blog and Podcast Blog, I’ve told the story about

Now WABC TV in New York has run a story about diagnosing mysterious wrist injuries, featuring Jayson and another another patient Dr. Berger has helped return to recreational golfing. It’s on ABC.com:

Social media tools such as YouTube and Twitter, while not directly mentioned in the WABC story, have played a huge role in spreading the word about Dr. Berger’s research discovery.

And as a result, many more patients will, like Erin, have an opportunity for a future without chronic wrist pain.

This post, which we put on the Mayo Clinic News Blog at the time of the first USA Today article and Twitter chat, has a list of the surgeons who have trained with Dr. Berger since he discovered the UT split. We’re sure many patients have been helped by these other surgeons as well.

This latest WABC story will continue to accelerate the diffusion of this research discovery, helping to fulfill the promise of social media as outlined in Thesis 33.

And in case you’re wondering how Jayson is doing now, check out his walk-off home run from yesterday’s game.

This post is part of a series related to my 35 Social Media Theses, in which I will discuss and amplify upon each of the statements I believe define the social media revolution, particularly as they relate to healthcare. This relates to my example of Thesis 33, which is being demonstrated as I write this.

Even though I firmly believe in Thesis 4:

…that in no way diminishes my appreciation for the power, influence and purpose of mass media. That’s why I have stated Thesis 9 as follows:

Mass media will remain powerful levers that move – and are moved by – social media buzz.

One example of this from my personal experience is, of course, the “Octogenarian Idols” story of Marlow and Frances Cowan, whose YouTube piano-playing video at Mayo Clinic has been seen 5 million times, and led to a story in the Des Moines Register and their appearance on Good Morning America and a spoof on The Tonight Show. These mass media features exposed at least another 5 million people to this special couple and their 62-year (so far) love affair.

I’m excited to be able to share another great story of social media synergy with mass media, and how it may help thousands of patients find relief for debilitating wrist pain. And it’s happening as I write this. 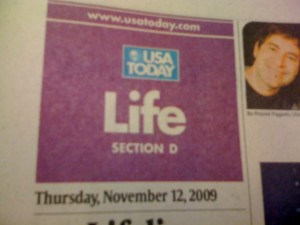 USA Today has a story this morning about Philadelphia Phillies outfielder Jayson Werth and his comeback from a career-threatening wrist injury. You can read Jayson’s story as written by Mary Brophy Marcus (@BrophyMarcUSAT – it’s also in the print edition), and for more background on the injury you can see Jayson’s Sharing Mayo Clinic story and the post I wrote on our Mayo Clinic News Blog when he hit two home runs to help send the Phillies to the World Series for the second straight year.

A big part of being able to do those posts was the Flip video camera, which I used when I was in Philadelphia earlier this year, to interview Jayson about his experience. And with those posts and having Jayson on video, Mary (and her editors) saw both the significance of Jayson’s comeback and how this is an injury that affects not just elite athletes, but everyday people.

It’s hard to know exactly how many people have a split tear of the UT ligament in their wrist, because most doctors don’t know about this type of injury. As Dr. Richard Berger, the Mayo Clinic orthopedic surgeon who discovered the injury type, has said, the MRI scans for these patients would typically be interpreted as normal because the ligament isn’t completely severed: it’s split lengthwise. So it may be as common as an ACL tear, but patients keep having to deal with wrist pain for which their doctors can’t find a cause.

That’s why getting this story in the mass media, in this USA Today article, is so important: it will alert many patients and doctors about a wrist pain cause they may not have considered. That’s why we scheduled a Twitter chat on #wristpain for Thursday, November 12 from 4-5 p.m. EST. Dr. Berger (@RABergerMD) will be available to answer questions and talk about the UT Split Tear injury and how it’s treated.

But this is where the real synergy comes in: Mary and her editors only had 30 column inches to devote to the story (believe me, we’re thankful for all the space they did find!) but they realized that people who think they might have a split tear will want much more in-depth information. And so they helped make it more likely that those people would be able to find the additional information, by adding this widget on the USAToday.com site: 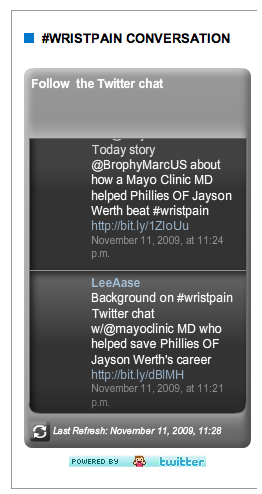 For our part, we did this blog post about the Twitter chat that also includes a list of surgeons Dr. Berger has personally trained, so patients can come to a surgeon closer to their home. We also included a link to a scientific paper Dr. Berger has published on the subject, as well as a TV story about a bowler with the injury and an in-depth audio podcast with Dr. Berger.

The focused Twitter chat this afternoon will be great, but the other neat part about having the social media component is that it can continue long after the one-day run of the print story. People can continue to ask questions by tweeting @RABergerMD or using the #wristpain hashtag, or may leave longer questions on the wrist pain post on our Mayo Clinic News Blog.

I hope you will pass this information along to everyone you can (especially if you know of someone with wrist pain), via Twitter, Facebook or old-fashioned email. I will keep you posted on some of the results we’re seeing from this social media/mass media synergy.

As I write this I’m sitting in the press box at Citizens Bank Park in Philadelphia, where the Phillies have just defeated the Washington Nationals 13-11. It was a come-from-behind victory that featured two grand slams by the Phillies (one by Ryan Howard and the other by Raul Ibanez.) Here’s the mlb.com wrap-up of the game.

I was in town to give a presentation on social media to the National Cancer Institute Public Affairs Network, and I got media credentials for the day in order to interview Jayson Werth, the Phillies’ starting right fielder, whose career was resurrected by seeing Dr. Richard Berger, a Mayo Clinic orthopedic surgeon and wrist specialist. I’ll have a post with my interview with Jayson on the Sharing Mayo Clinic blog in the next day or so.

Update: here’s the post with the video interview of Jayson.

But meanwhile, here are a few of the photos from my excellent adventure (click to enlarge):

Thanks to the Phillies organization for their hospitality, and to Jayson for being willing to do the interview. He has a really great story, and I look forward to being able to have him tell it in his own words on Sharing Mayo Clinic.