Advertising Age has an article this week in the print edition about hospitals, advertising, marketing and social media, and relates it all to health reform. I was glad to get to talk with the writer, Rich Tomaselli, last week to discuss some of the things we’re doing at Mayo Clinic, and our philosophy relating to social media. Rich had said the article would run either this week or next, and so I was glad when Jane Sarasohn-Kahn (@healthythinker) alerted me to it with her tweet linking to her blog post about it.

I think both Rich’s article and Jane’s post are good and make some valid points, and commend them to your reading.

Here’s my Advertising Age quote, upon which I want to expand a bit:

One of the most famous health-care facilities in the country, the 118-year-old Mayo Clinic, now has a social-media manager, Lee Aase. “Social media is the way word-of-mouth happens in the 21st century,” he said. “Twitter is just one of the most powerful networking tools that I’ve ever seen. It enables you to make connections with people that have a common interest.”

Quotes in mass media (like magazines, TV or radio) are always taken out of context. That’s not a criticism, it’s just a reality. Space and time are limited and expensive. Rich and I talked for about 15 minutes, and it was a great conversation. I’m sure he likewise had good talks with the others he quoted (and he did incorporate elements of our interview in his narrative.) There’s no way all of that is going to fit in a print article.

One of the benefits of social media, however, and why these tools are so powerful, is the opportunity they afford for more in-depth content and discussions. They provide a way to get more in-depth information to (and feedback from) people who are interested.

Given the fact you’re reading this, you must be one of those interested ones, when the topic is advertising, health care or social media. So here is some of the context of my conversation with Rich, and some reaction to the messages I saw in the article.

First, I’m quoted as saying “social media is the way word-of-mouth happens in the 21st Century” which is true and accurate, but the real point, and what I emphasized in the interview, is the continuity of social media with how Mayo Clinic’s reputation has been built over the long term. For more than 100 years, the number one way people have found out about Mayo Clinic is through the recommendation of a friend or family member. It’s also consistent with Thesis 1, that social media are as old as human speech.

Mayo Clinic hasn’t advertised nationally in the traditional media outlets. As Jane says in her post:

It takes information PLUS a “life moment” PLUS a “care connection” to a friend or loved one to deeply engage in health.

Paying for advertising (information) to be sent to a broad, undifferentiated group of people who aren’t currently experiencing the “life moment” or “care connection” is an iffy proposition. You’re paying to reach a lot of people who just don’t have a current need.

As I told Rich, the fact that 25 percent of our Mayo Clinic patients come from more than 500 miles away adds another layer of difficulty to the advertising equation. People need to be much more motivated before they will travel that distance for care. By definition, those patients are “deeply engaged.” But traditional advertising in mainstream media isn’t likely to be a great way to reach them because they are widely scattered across the nation (and even the world.)

This brings me to my other major observation, that the connection of all of this increased social media activity to health reform is significantly overstated. At Mayo Clinic, we have been involved in social media since 2005, starting with podcasts. We launched our Facebook fan page in November of 2007. We have been in Twitter since early 2008. We have been actively uploading videos to our Mayo Clinic YouTube channel for more than two years as well. And our Sharing Mayo Clinic blog for stories from patients and employees is nearly 18 months old.

I believe health reform legislation is essentially a non-factor in the growth in social media adoption among hospitals. Instead, as I explain it in my 35 Social Media Theses, the reason hospitals are using social media is because this is the defining communications trend of the Third Millenium.

As my good friend Ed Bennett (@EdBennett) said in the Advertising Age article, the number of hospital Twitter accounts has more than doubled in the last year, which indicates that this isn’t mainly spurred by health reform legislation. He also offers great advice on the “why” hospitals should be involved in social media:

Hospitals realize that word-of-mouth is the most significant driver you can have, so social media is an opportunity to humanize what can be a scary, complex institution… I tell hospitals “Don’t get into social media because you think you’re going to get more patients. Do it because you’re helping be responsible to people reaching out looking for answers.”

Social media in health care is about much more than just marketing. As for the increase in advertising spending that’s being reported, maybe health reform is playing a role in that. It’s not really my area of expertise, so I don’t have a strong opinion on the matter.

What do you think? Do you agree that increased social media interest among hospitals is essentially unrelated to health reform?

What relationship, if any, do you see between health reform and the reported growth of spending on hospital advertising?

Elizabeth and her husband formed the Wade Edwards Foundation after he was killed in a tragic car accident. Her personal breast cancer story made lots of news, and she says that when his campaign was active she spent lots of time criticizing her husbands’ Democratic opponents. So she spent her whole a major chunk of her speech attacking Sen. McCain, apparently on the grounds that her criticisms of Sen. Clinton and Sen. Obama were “old news.” How conveeeenient.

END_OF_DOCUMENT_TOKEN_TO_BE_REPLACED

Julie Appleby, USA Today, moderated this panel and asked each member to give a three-minute solution to health reform.

David Himmelstein, a promoter of single-payer government health insurance, is a primary care M.D. in Cambridge, Mass. He says we need to reform the insured as well as the uninsured. He says by spending what we currently spend on health care more wisely (31 percent for administration.) He says $80 billion insurance overhead would be eliminated.

Karen Davis from the Commonwealth Fund has five principles: Coverage for all, payment reform, a more organized health care system (a “medical home” that ensures access, not just coverage), narrowing the variation in quality and efficiency and bringing everyone to the highest level of quality, national leadership with the private and public sector working together.

Julie Barnes from the New America Foundation’s Health Policy Program has a mission to “preach hope and dispel fears.” She urged journalists to include solutions in their reporting. Their goals: cover all Americans, reduce costs and improve quality. She says these are inextricably linked. Covering everyone means we need to change how we pay doctors, paying not for quantity but quality. She says it can’t happen without bipartisan support, and that we need to encourage conversation.

Tom Miller from American Enterprise Institute says we need to introduce incentives that move us toward a sustainable, value-based health system. We need to encourage healthier behavior by consumers. More emphasis on primary prevention. He says he will “revise and extend his remarks” on the AEI web site.

The Davis/Commonwealth proposal sounds a lot like what the Mayo Clinic Health Policy Center has been advocating. Many of the principles are similar.

Miller says the mismatch between what we spend and what we receive is the fundamental problem. We can’t tax ourselves enough to pay for a program when overall costs are increasing faster than the economy.

Miller and Himmelstein got into a discussion that was, at the very least, “spirited.” Julie Barnes got her wish for “conversation,” I guess.

Julie Appleby asked each of them to suggest story ideas for the assembled journalists. Their suggestions:

END_OF_DOCUMENT_TOKEN_TO_BE_REPLACED

Yesterday was a big day blogging for me…not with SMUG, but on a work-related blog.

Tom Brokaw was the keynote speaker and moderator for the opening session of the Mayo Clinic National Symposium on Health Care Reform. I hope SMUG students will check out Mayo Clinic’s Health Policy Blog, which I’ve been using to capture the essence of the symposium proceedings and to help extend the conversation both geographically and temporally.

This is the equivalent of a capstone project, enabling me to apply for a business purpose the things I’ve been learning through my personal blogging. It’s been an interesting experience, and I’d appreciate any comments or suggestions here on ways I can improve what I’ve been doing there. 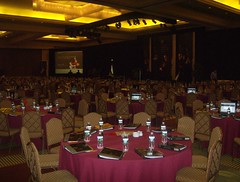